The City is under a State of Emergency and curfew, effective immediately. View the proclamation here.

The entire City is now under a curfew that shall apply to the hours of 11:30 p.m. to 6 a.m. No person shall be afoot in public, including streets and sidewalks, parks, places open to the public, or public areas of any nature during curfew hours. The intent of this curfew is to clear the public areas of non-essential foot travel. 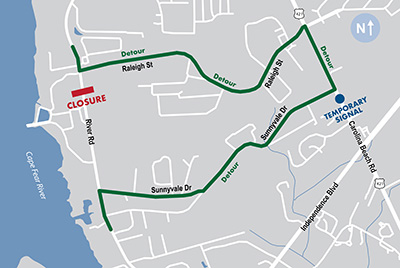 A six-month closure of River Road will begin in September so crews can replace a large drainage culvert beneath River Road. The culvert, located just south of Raleigh Street, was originally damaged in 2017 and failed again during Hurricane Florence. Temporary repairs and paving have allowed the road to remain open in the meantime while planning for this replacement. The Cape Fear Public Utility Authority is contributing $885,000 of the total project cost of $1.37 million because it involves the relocation of a force main sewer line. The work will be performed by Trader Construction of New Bern.

Note: This is one of several large repair projects the city is undertaking this summer in the next phase of efforts to repair damages to streets, sidewalks and drainage systems across the city that were damaged during Hurricane Florence. After initial repairs were made following the storm, the city had to get federal inspection and approval for all of the identified repairs for reimbursement of funds before work on this second phase of repairs could begin.

View a PDF of the map.