Starting Wednesday, Oct. 23, Montgomery Avenue, between Princess Place Drive and Market Street, will be closed to thru-traffic as crews make repairs to an underground drainage pipe. The closure will last approximately four weeks. This project is part of a second phase of efforts to repair damages to streets, sidewalks and drainage systems across the city that were damaged during Hurricane Florence. After Montgomery Avenue is completed, similar repairs will be made on Shell Road Village Drive, which was also damage during the hurricane. A small portion of the project will include work at the Municipal Golf Course, but that work is not hurricane related.

The $431,296 project involves a repair method that prevents the need to dig up the street. Contractor Vortex Services of Florida uses existing manholes to access the pipes and inject a liner that fills the pipes’ cracks and holes from within and 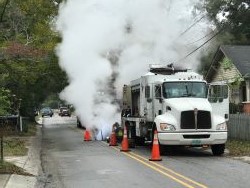 then hardens into a new pipe. Similar repairs to stormwater infrastructure beneath Henry Street and Caswell Street were completed earlier this month.

The Montgomery Avenue work is one of the major projects the city has underway or planned to make needed repairs after Hurricane Florence struck last year. After addressing immediate repairs following the storm, staff worked for several months to identify all the city streets, sidewalks, buildings and drainage infrastructure across the city that need to be repaired. The city also had to get federal officials to inspect and approve each of the repair sites to make sure the city could receive federal/state reimbursement before the projects could go forward.

Because the city has to pay for all of these repairs out-of-pocket with taxpayer dollars, the federal inspections and approval were critical to make sure the city gets reimbursed for as much as possible. So far, the city has spent or appropriated more than $30 million in response to the storm and hopes to get much of that reimbursed. Status of repair projects can be tracked here.

The project is expected to be completed in early December.