In December 2016, City Council voted to adopt an ordinance establishing a Municipal Services District (MSD) for the Central Business District (CBD). The ordinance went into effect on July 1, 2017.

An MSD is a special service district authorized by state law. Properties within the district receive additional services beyond what is provided in the rest of the city. To pay for these services, properties within the MSD will pay an additional tax of 7 cents on $100 of property valuation, generating an estimated revenue of more than $375,000 per year. Property owners can check to see if their property is located within the MSD on this online map.

Under the MSD service plan, the funds raised would provide additional services only in the MSD, including:

A 14-member, Council-appointed advisory committee made up of property owners, residents and businesses within the MSD was established to make recommendations of what services will be provided. The City Council will make the final determination based on these recommendations. City Council approved the membership of the MSD Advisory Committee in June, 2017.

This committee meets every 3rd Thursday of each month at 5:00 p.m. in Council Chambers at City Hall located at 102 North 3rd Street - 2nd Floor .

The city has been considering an MSD for many years. In 2014, City Council entered into an agreement with Wilmington Downtown, Inc. (WDI) to evaluate the establishment of an MSD. In February 2016, WDI presented their final report and recommendation concerning the establishment of the MSD.

In March 2016, the city held a special public input meeting concerning the possible establishment of an MSD. A public hearing was held in October, 2016.

In June 2017, council awarded a contract to WDI to manage the services provided in the MSD. 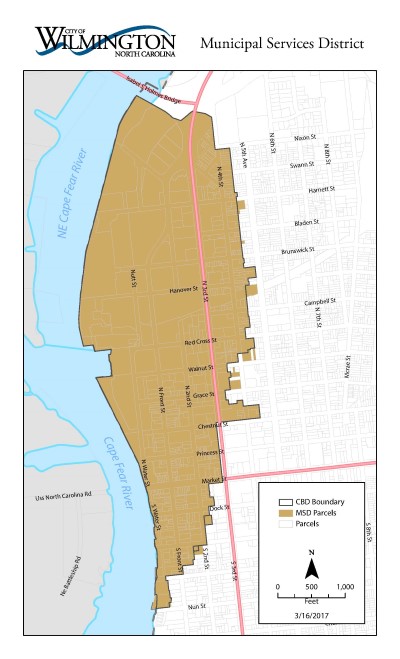