The State of Emergency regarding COVID-19 is still in effect. View Frequently-Asked Questions (FAQs).

Work is underway on the city's flagship North Waterfront Park. After several revisions and a re-bid to reduce construction expenses, the city now has a plan of action and an approved construction contract of $29.17 million. The park is expected to be ready for the 2021 concert season.

Increases from the initial $20 million estimate are largely related to infrastructure and site improvements in and around the site, as well as construction cost inflation that has become more pronounced since Hurricane Florence.

The final plan contains all but two of the originally planned amenities for the park – public art and the floating dock – that can be added later. The park will be a cornerstone attraction for all of Wilmington and our surrounding region to enjoy.

Click here to see a presentation about the final design approved by City Council on Nov. 19, 2019. 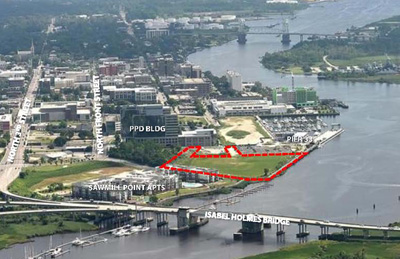 View a site map of the existing location

What will be included?

The park will include numerous amenities, including:

In 2013, the city purchased a 6.6-acre tract of land for the park along the northern downtown waterfront, near the Isabel Holmes Bridge. An extensive public input campaign was conducted to get feedback about what citizens wanted in the park. The input was used to develop the park North Waterfront Park Master Plan, approved by City Council in 2016.

The park will be partially funded by the voter-approved 2016 Parks Bond.

In October 2018, the Wilmington City Council approved a sponsorship policy that will be utilized to generate private investment in the park. This type of sponsorship program is common for urban downtown parks across the country, especially for large parks that serve as a regional and/or national attraction as North Waterfront Park is expected to be. The park will not only serve as a regional destination because of the park and gardens on the riverfront, but also a national attraction because of the bands the stage venue and park will accommodate, which will be the largest on the NC/SC coast.