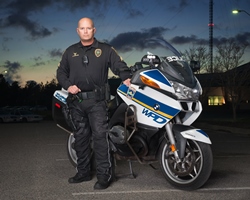 The Traffic Unit's primary function is to enforce motor vehicle laws in the city of Wilmington. The officers patrol in unmarked vehicles that are equipped with radar units, laptop computers, portable breath testing (PBT) instruments, tint meters and other unit specific equipment. Officers also conduct presentations to educate the public about the dangers of violating the law. Additionally, the Traffic Unit is responsible for the investigation of all fatal crashes, police-related crashes, and pursuit-related crashes. Within the unit are several crash re-constructionists that are equipped with crash reconstruction software and tools used at the scene of at the scene of a crash.

Specialized positions within the Traffic Unit

Civilian Crash Investigators - Wilmington Police Department has two civilian crash investigators that are responsible for investigating vehicle accidents that resulted in property damage. They investigate over 1,000 crashes each year, freeing up countless man-hours for the police officers to handle other calls for service.

DWI Enforcement Team- includes four officers whose primary function is to detect and arrest impaired drivers. Two of the current positions are funded by the North Carolina Governors Highway Safety Program. All of the members of the team drive unmarked vehicles.